By the later decades of the century, NAREB’s narrative of Americans as a home-owning people–a people whose good is served by state support for private, profit-driven development–functioned as a frame to many ordinary stories. When prospective home buyers considered moving to Wexner’s New Albany, they did not tell themselves “I plan to take advantage of public subsidies for private housing for the privileged, which I endorse as legitimate,” but instead, “It’s in my interest to move here,” and “I like this place.” (167)

Hayward’s most insightful observations in a work that is provocative throughout are that, contrary to some PoMo ideas that identities are fluid narrative constructions, certain narratives, rooted in individual and group interests, can be materialized and institutionalized so that even when elements of the narrative become “bad stories” that (if we’re being optimistic about society) violate contemporary ethical norms (“blacks lower property values and should be excluded”) or are internally incoherent (“the private market built the suburbs without help from the government”), they continue to frame the stories the privileged tell about their situations, thus depoliticizing what are in fact highly political decisions about the allocation of resources.

Chapter 5, “White Fences,” from which this quote is drawn, is really an impressive piece of scholarship, integrating a critical legal analysis of private school subsidy jurisprudence, a takedown of public choice theory, and a cogent set of thought experiments that demonstrate that public schools in elite suburbs are the functional, moral, and political equivalent of “segregation academies” though of course are unrecognized as such.

Another provocative polemic by Kevin Baker in the NYT yesterday (I linked to another of his pieces in this post). Baker could, I think, hit on the point a bit more directly that the GOP platform doesn’t so much institutionalize neglect of cities per se as the people in them, but he offers a concise overview of the fall of urban Republican politics from the New Deal forward, a process that was further accelerated by the suburbanization of the nation’s electoral center of gravity (in terms of ideology, policy, and demographics).

But it’s not just malign neglect; despite the role of anti-urban federal policies past, present, and future in supporting suburban expansion at the expense of cities and the environment, conservatives, racial reactionaries, Tea Partiers, and the rest of the current GOP coalition have developed an insistent posture of victimization to explain and justify their policy choices, as Baker shows:

The Obama administration, the Republicans conclude damningly, is “replacing civil engineering with social engineering as it pursues an exclusively urban vision of dense housing and government transit.”

If you think the phrase “social engineering” means more than just apartment buildings and bike lanes, claim your cookie. The ideological fusion of race and place provides much of the support for suburban grievance politics against cities.

In my ongoing research on Atlanta’s suburban secession movement, which gained steam as Republicans won control of the state legislature in 2004 with members from north Fulton County suburbs making up a key voting bloc), one thing that’s struck me is that secessionists don’t often try to make the case purely on the ground of rational self-interest, though it’s undeniable that secession would have tremendous benefits for affluent north Fulton County. 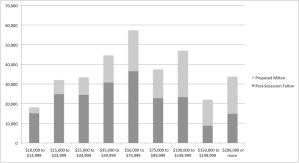 From American Community Survey 5 Year Estimates, 2006-2010 (Once Congressional Republicans defund the ACS, we can ignore social facts like these!)

Alternately, we could look at the median household income of the five cities versus the county at large (also from the ACS 5 Year Estimates for 2006-2010).

Even the poorest of the north Fulton cities is more than $10,000 above the county median. It’s pretty much impossible to think about secession without considering this disparity and what it would mean for the ability of Fulton County to serve the needs of its poor.

There are lots of arguments for secession that could apply abstract principles of local control and small government to skirt the equity implications. Some secessionists make such arguments, but many also take the resource distribution implications head on, and commit to the argument that they are the ones being robbed. Interestingly, the antagonist that they identify is not only the city of Atlanta, but the largely African American suburbs and unincorporated areas in south Fulton (suburbs are more diverse than Baker acknowledges, though the GOP policy reflects a more affluent and whiter section of suburbia). My guess right now is that there are two factors at work. First and most evidently, the modern conservative movement, its denunciation of “the race card” and the “phony war on women” and other instances of liberal attention to injustice aside, loves to pick up the cross of victimhood. They’re also particularly invested in the idea that black political rule will inevitably be used to exact reparations from white America (see Limbaugh, Rush). But I think it’s also worth considering the way that partisan politics, and particularly the organized anti-urbanism of the contemporary GOP, are driving a policy agenda that would cut Atlanta and black majority south Fulton out of the loop politically. The fact that material interest, racial prejudice, and partisan advantage align overdetermine this outcome.

Despite the facts that wealthy suburbs have used state, federal, and local power to cordon themselves off from low-income housing, derive unfair benefits from racist mortgage lending and homeowners insurance schedules that transfer wealth from  low to high income areas, and hoard opportunities and resources while benefitting from regional economies organized by urban institutions, they argue that black-led governments, from Atlanta and Fulton County to the Obama Administration are conspiring to rob the suburbs to pay for the cities. On “the internets” I’m told that “the kids” refer to this as “butthurt.” I’m trying to find a more scholarly description, but I suppose that will do for now.

There is one issue, though, where I’ve got to disagree quite strongly with Baker. He bemoans the lack of a Republican interest in cities, arguing, with some justification, that bipartisan competition for urban votes might incentivize better urban polices. Baker looks to Cory Booker as an example of an urban politician disgruntled with one-party rule whose discontent represents a potential for political innovation:

At a moment when Republican Party’s “dog whistles” are more racially pitched than ever, this may sound crazy. Yet one got the impression this election season, for instance, that Cory A. Booker, the mayor of Newark, would like some new place to turn. Mayor Booker has battled valiantly against the sclerotic, black political establishment in his own city as well as outside white indifference. A Mayor Booker who had someplace to go besides the Democratic Party with his city’s votes would be immediately empowered as never before.

Booker’s approach–fiscal conservatism, entrepreneurial social activism in lieu of a comprehensive safety net, and a voice for Wall Street bond investors–already has its ideal patrons in the contemporary Democratic Party, typified by Chicago Mayor Rahm Emanuel, whose social vision for cities I’ve already discussed. Rahm isn’t telling the city of Chicago to drop dead, but he’s not interested in helping 90% of its population live well. Booker’s a rising star in the party, and it’s not because he’s out of line with its urban policy.

UPDATE: And I’m not sure that this adds up:

Republicans in turn could show on a very human level that they are more than the mere radio ranters who constitute so much of what urban voters get to hear of the right wing. They would have to vie for votes in a manner that reflects urban realities instead of fantastical theories. Imagine a serious, practical discussion of educational reform or mass transit, instead of more heavy-handed attempts to demonize teachers’ unions or privatize the rails.

I agree that reality-based urban policy is in order, but we need reality-based political analysis too. The national Democratic Party and members of its neoliberal star system are driving the train (privatized, natch) of education reform and the privatization of services, down to the parking meters. I’m not holding my breath for the GOP to move several notches to the left of right-trending Democrats to hunt for votes among the demographics their base holds in contempt (though without funding for clean mass transit service, holding one’s breath might be a good idea in general).