Dylann Roof, a 21 year old white man, has been arrested in connection with the deadly shooting in Charleston’s Emanuel AME Church. Roof allegedly killed 9 congregants including the church’s pastor, Clementa Pinckney. It’s entirely possible that Roof was mentally ill, but that’s frankly irrelevant to the conversation, because his actions reflect a current of racist suspicion and hatred of Black and other minority communities. Roof’s alleged crime is not that of an irrational actor going against the mainstream of society’s values (update: as journalists have investigated Roof’s online presence, it seems pretty clear that he was a committed white supremacist well versed in the rhetoric of organizations like the Council of Conservative Citizens).

“I have to do it. You rape our women and you’re taking over our country. And you have to go.”

This is right out of Birth of a Nation, though it has some more recent instantiations: 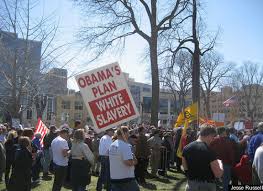 Pictures from Roof’s Facebook page also show him wearing the regalia of the former white supremacist states of Rhodesia and apartheid-era South Africa, places where, apparently, things were better before Black people took over. 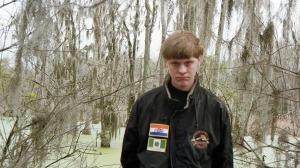 A lot of people are probably going to frame the story, and Roof’s public display of white supremacist totems, in terms of mental illness, which one can only imagine will be diagnosed in short order after his arrest this morning. But although Roof’s veneration of white supremacist regimes is surprisingly cosmopolitan, he does live in a state where symbols of a home-grown racist terror regime fly on the grounds of the Capitol in Columbia (and other public and private places beyond count–update: including on Roof’s car).

So it matters that Emanuel AME is a historically significant site for Black Charleston and the struggle for Black Freedom. It’s the oldest AME Church in the South. Denmark Vesey, leader of a planned slave revolt thwarted in 1822 was a founding member of the congregation, and it has been central to the movement against white supremacist terrorism in South Carolina since. Megan Specia offers a nice summary here. And Jamell Bouie here.

It may well be attributing too much intent to Roof to argue that he targeted Emanuel AME as an assault on that legacy, though on the other hand, I don’t know what more appropriate target would present itself to a man convinced Black people were “taking over” in Charleston (update: and, as Greg Grandin writes, the assault did take place on the anniversary of the day Vesey’s planned, but thwarted, rebellion. Perhaps just a staggering coincidence….). But it is nonetheless a reminder of the historical precariousness of Black public spaces, of their vulnerability to violence, and of the unreliability of the state’s protection of their security, a reminder that is more pointed in a state where the Confederate flag still flies on the Capitol grounds.

Indeed, while Roof may well turn out to be delusional, his targets weren’t randomly chosen but socially overdetermined. When social categories hold material and ideological significance–determining who can access resources, who can participate fully in the privileges of a society, or who can expect protection from the law or respect from strangers in public–people tend to be perceptive to those categories, and in turn to affirm the categories as valid and to attribute the social position of individuals to the characteristics of the group.

This process is called social cognition, and it explains why, despite the ideological ascendance of color-blindness as an ideal, negative perceptions of Black Americans and other minority groups remain tenacious, and why the visibility of Black people in public, whether it’s at a swimming pool in McKinney, Texas or in a historic AME Church in Charleston, can spark the reaction that those people threaten the social order (“taking over our country”) in ways that seem to justify violent repression. If we focus on the context of shared social cognition, instead of on the severity of an individual’s action in response to that social cognition, the continuity is more readily apparent. Tracey Carver-Albritton perceived that black teenagers were outsiders to her community pool and threatened to “take over,” taunted them to return to “Section 8 housing,” and physically assaulted one of them while others called the police to help expel the teens, rather than to stop the assault. The difference is of degree, not of kind. The teens in McKinney, too, “had to go.”

Sometimes these social cognitions play out in ways that aren’t as readily apparent as instances of racism, because they work through institutional mechanisms rather than through interpersonal animus. They express themselves through a spatial ordering of bodies and material and symbolic resources that George Lipsitz calls a “public pedagogy of race” by which the perceived characteristics of places and the presumed characteristics of groups of people are mutually reinforcing. Because social cognition works so profoundly through places, it can and indeed frequently is maintained through mechanisms that are not overtly racial but produce disparate impacts.

Which is why, as I wrote a week ago, we should be paying attention to the links between the Supreme Court’s pending decision on the Fair Housing Act and the kind of incidents we’ve seen in McKinney and, tragically, in Charleston. The court today made a somewhat surprising decision that touched on the veneration of white supremacy, ruling that the State of Texas can exercise its own inherent free speech rights by banning a license plate honoring the Sons of Confederate Veterans (I should mention that I touch on the major precedent in this case, and the issue of speech by cities as corporate bodies, in my article “Uniting Citizens After Citizens United“ now published in American Studies). This is nice, and it’s a pleasant surprise that the State of Texas would exercise its speech rights in this fashion, in response to the concerns of civil rights advocates, considering the prominence of Confederate memorials on the Capitol grounds in Austin. But the court’s decision on whether the Fair Housing Act can be invoked in cases of disparate impact, or only in cases where public officials explicitly segregate or deny housing by race, will, as Kriston Capps writes for Citylab, be far more important in the long run.

Recently in McKinney, Texas, a white woman cut right to the heart of this case when she reportedly told a black teenager to “go back to your Section 8 home.” The Supreme Court might as well have broken up that pool-party fight in McKinney. The woman’s callous taunt is utterly germane to the serious constitutional question before the court.

This case is literally about whether a local government can apply federal housing tax credits to segregate, as long as it doesn’t openly proclaim it. Can state and local governments decide where minorities belong? Can they support a “public pedagogy of race” with the spatial distribution of tax credits for low-income housing? Can they collaborate in constructing systems of social cognition that make Black presence in particular places appear as a crisis of the social fabric? Unfortunately those questions have got far more to do with the Charleston crime than a license plate, and from most accounts of the oral arguments, the decision could go either way.