It’s been a long, long struggle to whip this unruly article into some sort of shape and to find a journal and an audience for it, but I’m happy to say that American Studies will be publishing my essay, “Uniting Citizens after Citizens United: Cities, Neoliberalism, and Democracy” as the lead article of its upcoming issue.

Check out the cover from AMSJ’s Twitter (@AmericanStJournal), featuring a photograph of protest against Detroit’s Emergency Financial Manager by James Fassinger. 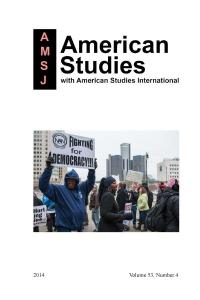 I’ll have more to say about this when it gets into print–much of what I’ve written here about city power, cities as instruments of public democracy, and the way that the relationship between cities and state governments is inflected by racial and class inequality is informed by the foundational reading and groundwork for the article–but for now, enjoy the cover, as I certainly am.