Courtesy of Creative Loafing Atlanta, a repost of an Atlantic Cities post by Richard Florida making the observation that Atlanta’s “creative” and “service” classes exist in stark separation from one another.

This reminds me of something else I’ve seen, but I can’t quite put my finger on it….. 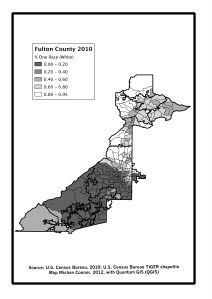 Want to keep with the pretty colors theme? A student sent me this just today:

The Creative Class enterprise reminds me of the kinds of epicyclical sub-orbits that geocentric astronomers used to explain “retrograde motion” in planets they assumed were revolving around the earth. It’s got more moving parts than it needs, and makes things far more complicated than they need to be because it puts the wrong object at the center. A “creative class economy” is a historical product of educational outcomes and of a harmonious relationship between financial capital and certain forms of human, social, and cultural capital that make those kinds of capital pay for the people who possess them. Given what we know about differential access to that financial, human, social, and cultural capital in Atlanta, and the overlays of place, race, and opportunity structures, who would expect a pattern any different from the one Florida observed?

The other problem with creative class analysis is that it’s not only too complicated, it’s also too simple, and indeed, circular. If an analysis starts with the human capacity for creativity, which is universal and whose sum is theoretically limitless, it seems quite easy to make the places that are low on the creative class rankings look more like those that are high. Just have more creativity. Corporate lawyers in Buckhead, rap videographers in Bankhead, it’s essentially the same (except for the pay, the benefits, and the life expectancy), and the more the merrier!

But centering the region’s history of racial division in our analysis actually forces us to consider the stickiness of these forms of capital in places, and how the material and social preconditions of a functioning creative class economy are contingent on a distribution of resources that white people in the region have for generations chosen to construe as a zero-sum competition. I’m currently teaching Kevin Kruse’s White Flight to my “Making Modern Atlanta” class, and two things about this Atlantic Cities piece strike me as remarkable: First, the highest ranking “service class” areas include the West End, Adamsville, and Lakewood Heights (all primary points of origin for white flight in the 1950s and 1960s), along with longstanding black ghettoes like Vine City and working-class suburbs like College Park that have passed racial tipping points. Second (and hold onto your hats when I tell you), some of the highest ranking “creative class” areas include Sandy Springs, a major receiver of white flight and white inmigration during the boom of the 1990s, along with the Midtown and Druid Hills communities near Georgia Tech and Emory, and the historically wealthy section of Buckhead, which even though it sits within the city limits of Atlanta remains the whitest part of Fulton County. I suppose a third thing that strikes me is that Florida apparently doesn’t consider any of the racial dimensions of Atlanta’s social divisions noteworthy.

Atlanta as a region needs a lot of things. But it doesn’t need paeans to the curative properties of creativity when generations of stratification organized by race and through place pervade the entire opportunity structure of the region. It needs political movements for equity. If a lucrative economy in possum skinning or tightrope walking emerged tomorrow, you’d probably find its practitioners settling in Buckhead and Sandy Springs, and paying out for Kaplan Possum Prep courses and summer circus camp to ensure the next generation’s advantage.

And  even in the favored precincts of the creative economy, things aren’t looking so rosy these days.