on Wednesday afternoon, with my talk, “Color-Blind” Racism and the Fulton County Secesssion Movement. 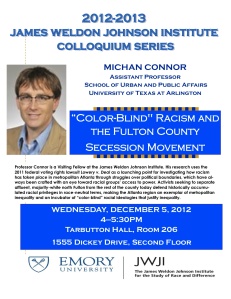 I discussed the politics of space and place in post-WWII Fulton County, arguing that the current movement to split off northern Fulton County as Milton County is a part of a longer legacy of spatial politics that have been aimed at creating political spaces that shield whites from financial obligations to minorities and, relatedly, from political accountability to minorities. This political component to the politics of suburbanization is, I argue, underappreciated, but is essential to understanding the push to split Fulton’s wealthy, largely white northern suburbs from Atlanta and south Fulton. I also enjoyed the unexpected attendance of a current Fulton County Commissioner and that Commissioner’s Assistant for Legislative Affairs (a former state legislator); these were two people on the front lines of the controversy I’m studying and their contributions to the discussion after my presentation added a level of immediacy and urgency to the topic that I rarely experience in an academic setting, even when the subject is, as usual, politics.  I’m excited by the prospect of working with them in the future.

As for the talk itself, I focused one one broad political thesis, that the ideological framework of color-blind racism is politically essential to secession because it takes a set of facts that suggest–almost unavoidably–that the secession movement is about separating white people, property, and governance from African Americans and presents them in a framework that is ostensibly race-neutral. In other words, given this racial distribution as a social fact:

and this distribution of income as another social fact:

the secession movement depends on a political narrative, several decades in its evolution, that explains north Fulton place politics in the race-neutral terms of self government, efficiency, and local control, with a healthy dose of privatization for 21st century flavor. My historical thesis is not as well developed in this talk, but I stressed that in earlier episodes of annexation controversy in the Atlanta area, some participants produced overtly racialized arguments that suburban whites should resist annexation because it would lead to being governed by a ruling regime in Atlanta that was increasingly influenced by black votes and black officeholders. This core argument about government, stripped of its overtly racist components, became a template for a winning politics of suburban independence that is today central to the secession movement.

I might add that I produced these maps for the presentation. Given a bit of time for the software’s learning curve and a good deal of patience for locating data, QuantumGIS is a very serviceable free GIS application, and one that is accessible to Mac users like me. It’s also fun making maps, although, as you can see, I have neglected to standardize my layouts and borders, so I’ve got some more work to do to make these presentable.